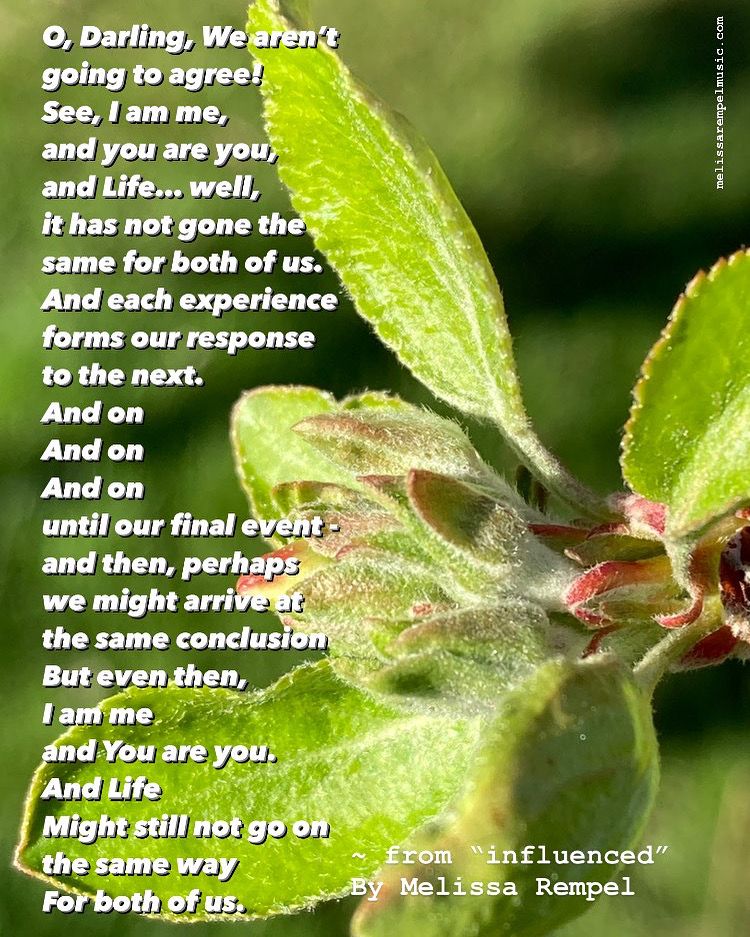 and you are you,

it has not gone the same for both of us.

forms our response to the next.

until our final event -

and You are you.

For both of us.

Today, I fell down a rabbit hole. It was fast, and panicky, and I felt… Triggered. Defensive, Aggressive. Protective. On the surface… but underneath that I felt unseen, unknown, unappreciated, overlooked, and used. Like a means to an end. For someone else.

I’m sure my family would say that I have always seen myself as the exception to the rule. I have never wanted to engage in a process simply because it was “process.” With the exception of baking cakes, an endeavour which requires consistency, if not precision (although it is always ok to spill the vanilla, in fact, I endorse this practice), to ensure one does not fall flat in the execution of the process, I feel things are potentially subjective. My mother taught us as children, the “proper” way to do things. My life has been a series of learning and unlearning. Some I have kept, others I have left. I engage logic, reason, ingenuity and assessment of my own success in the determination of future endeavours. If it ain’t broke, don’t fix it, they say, but what if they don’t know it is broken? That takes the willingness to try it differently and see. Necessity is still the mother of invention. Failure creates ideas.

Ideas. O, the danger of ideas in the 2020’s. All the way through the 1900’s ideas propelled the free world. Now, they can have you ostracized in 20 seconds. Why? Because everyone knows everything and nothing. People are influenced, not educated. And those who think they aren’t influenced, usually look for someone who is educated to back their ideas. The difficulty? the educated are also influenced. It’s a mess, and we are being raised to believe that there has to be one infallible point of view. The opiate of the masses… certainty. The vulnerability of the masses? Expert uncertainty. 2021, Worldwide: the boat, is rocking. And people are grabbing everything from the mast to the air in the sails. They then pass on their certainty (drug of choice) and talk down to everyone else who grabbed on to something else.

But what if my experience doesn’t match any of those things considered certain? What, if, I don’t want to be afraid? What, if, I want to be proactive in an alternate direction? What if I already tried what you are handing me, and I have rejected it based on the futility of its use and the void of logic? Does your expert influence trump my right to an experiential analysis and alternate education?

Enough about that. Here’s what I noticed in my verbal sparring today. It wasn’t sparring. I said what I thought, and then someone’s fear took up the gauntlet. In the vacuum of a social media interaction, I was completely misunderstood, and then bludgeoned, not for the thoughts I expressed, but for the perception of my character according to a stranger. I pointed out the irony of my experience, and the reality that it caused me to question the norm, and I was scorned. I knew from the get go, that I wasn’t going to change their mind, but I wanted to be understood.

Nope. This person was influenced beyond their intelligence and, quite possibly, education. I suppose there is judgment in that statement as well, but hear me: if an alternate experience to yours causes you to scorn another human being, you are not going to influence them. You are not going to champion your cause, you are going to inevitably make yourself look asinine. Educated, intelligent people ask more questions than they answer. They seek, not the comfort of their own supported ideologies, but to know the people who hold opinions.

I miss discussions. Not presumptive conversations, but opportunities to learn from someone else, who is not delving into the hypothetical, but has experience, working knowledge, understanding. These people grow, change, and in the process of interaction, propel me forward. Education has made them open to the wonder, and possibility that all things are not known, rather than validating their insecurity and making them arrogant.

All of the staunch beliefs we hold should be subject to the scrutiny of context. Politics, religion, morality, perpetuation of cultural norms, approach to health and medicine. If you were born thinking one thing, and can hear nothing else, you are seeing only that the light of the sun, and missing the nuance of the sunrise, or the sunset, the music of the wind, the weight of the clouds. If you live and die in the narrow vision, you have not experienced life. Fear has determined your experience.

I realized I was afraid of being unknown, and that made me cast some beautiful pearls before swine. It is mine to be secure in the knowledge of myself, only. It is also mine to attempt to know another with whom I seem to disagree. Facts are, Facts.  But how we interpret them is strongly altered by our life experience. Next time you want to squash the insolent bug who disagrees with your expert, ask yourself why you reached for your verbal fly swatter. If it is because you want to be known and understood on the basis of your being, and you want your experience validated… ask more questions than you give answers. Put boundaries around yourself instead of sanctions on them. You don’t have to agree, but it shouldn’t determine whether or not the human in me can meet and greet the human in you.

You, after all, know how you came to believe what you believe: personality combined with experience provided perspective, exposure to knowledge (education), and the allowance of free thought determines your ability to process. Some people were never given this freedom. Some people never wanted this freedom. And some people become innovators and scientists, changing the world forever, not because they were educated, but because they thought. For themselves.

You can hate me if you want. But don’t disdain me until you get to know me. But be careful… once you know me, and compassion triumphs over judgement, you might understand me until you like me, and then, you’ll have a friend to discuss things with, and we both might grow.

Or, keep being influenced. It’s up to you.